The Thomas BRYANT on page 43 of "So Obscure A Person,” was married before 1783, according to source #75 on page 60, which references the will of his father James BRYANT.

According to the 1783 will of James BRYANT, Thomas BRYANT had daughters Elizabeth BRYANT and Fanny BRYANT, both born before 1783.

**UPDATE: Please read the comments as to whether Elizabeth and Fanny were one person or two.
Posted by Edna Barney at Tuesday, September 30, 2008 7 comments: 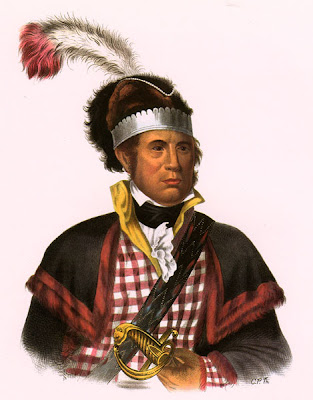 Chief William McINTOSH was a Coweta Creek Indian whose sister married into the STINSON family of Georgia and Alabama. The father of McINTOSH was Scottish. This image of a hand-colored lithograph is from the McKenney-Hall History of the Indian tribes of North America (1858), after the 1825 painting by Charles Bird King.

The George STINSON on page 99 of "So Obscure A Person”, was married to the sister of Chief William McINTOSH, before 1824. According to "The Politics of Indian Removal," Michael D. Green, 1985, pages 61, 62, 68, George STINSON was heavily involved in Indian trading and affairs with his brother-in-law Chief William McINTOSH. STINSON was arrested, his goods confiscated, and he was indicted at U.S. District County, Savannah, in August 1824. At the trial it was stated that George STINSON was married to a Creek woman and therefore an "adoped ... citizen of the Creek Nation." His defense rested upon his not being subject to trade restrictions of United States law, as he was an adopted Indian. Amazingly, STINSON was aquitted by the jury. William McINTOSH had a half brother from Savannah named John McINTOSH. From the 1850 Census, we see that the wife of STINSON was named Matilda.

Russell REEDER, a descendant of George and Matilda STINSON said that his mother knew the granddaughters of Matilda and they related that she was always proud of her native American ancestry.

This is basically some additional information for #74, James STINSON on page 100 of "So Obscure A Person.”

According to descendant RUSSELL REEDER, the full name of JAMES was "JAMES BRYANT STINSON." This seems to continue the inferred BRYANT name from his grandmother Anne, the wife of Cary STINSON. This discovery also lends further credence to the inferred father of Anne on page 62 of my book. I had found him as "James R. STINSON" in the following "transcribed" marriage record. That was probably a misreading of the letter "B" by the transcriber.

Descendant RUSSEL REEDER told me that James and his brother Alexander W. STINSON married sisters, who would have been the TALBOT wives who appear on page 100 of my book.
Posted by Edna Barney at Sunday, September 28, 2008 No comments: