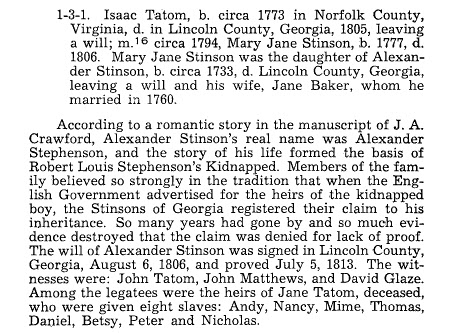 This is to inform you about a mistake in your book. There were two Johanna Stinsons. Alexander Stinson's daughter Johanna married EDWARD Adcock. If you look at the will, it says EDWARD. They stayed in VA. Alexander Stinson's son Joseph also had a Johanna. His will mentions daughter Johanna and husband EDMUND Adcock. They went to Georgia. I know it's confusing, but it's important to pay attention to names.

slgennut1 -- Thank you for purchasing my STINSON book, "So Obscure a Person." I don't know what you are referring to about EDMUND and EDWARD ADCOCK. The names appear on pages 35, 42, 43, 48 and 68, of my book and are the same person. Sometimes in the old records his name was spelled EDMUND, EDMOND or EDWARD. It seems the preferred spelling was EDMUND which is what I have tried to use consistently, but at times I make typos too. EDMUND ADCOCK and his wife JOANNA(H) did not stay in Virginia; they indeed went to Georgia, as records prove.

JOANNA(H) STINSON appears in my book on pages 29, 42, 43, 68, and 189. They are all the same person, although the name was spelled JOANNA or JOANNAH in the original records.

Everything I gathered about JOSEPH STINSON appears on pages 51 and 52. Although I record only the name of one child, I state that he shows on the 1790 Census with nine people in his household. I did not find JOSEPH STINSON's will, and I cannot verify all the names of his children or that he had a daughter named JOANNA STINSON. If you have access to such documentation I will be most eager to receive it and post it here.

Of course I believe "it's important to pay attention to names" and I did indeed do such in my STINSON genealogy book. I created this blog to correct any errors in the book, and in this case I see nothing that needs correcting. Respectfully yours, Edna Barney

I had recently purchased your book. I am so excited about it. I am the Ggreat granddaughter of Grady Stinson. I am in the process of trying to join the DAR. I am so thankful for your research.
God bless you. Robin Erwin